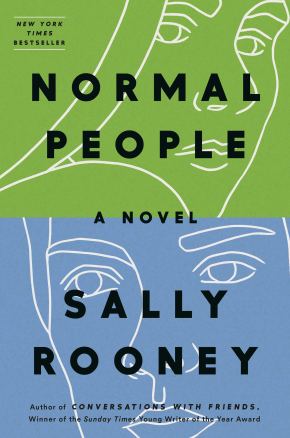 This book was published April 2019 and I don’t recollect a ton of buzz about it back then.  But then a couple of months ago, I started hearing about it more and more.  Come to find out, it was released as a Hulu original series in April 2020.  But as usual, I reach for the book before the movie or television series…I am after all a librarian and will relentlessly advertise my opinion that the book is ALWAYS better.  It just is.

So, Normal People by Sally Rooney. This was an interesting little read for me.  The story centers around two teenagers in Sligo, Ireland.  Marianne, who is from a monetarily wealthy family, but lives with a mother and brother that are emotionally and sometimes physically abusive.   Then there is Connell, who does not possess monetary wealth, but has a loving and supportive mother that has raised him on her own.  The book explores the very complicated relationship that Marianne and Connell have, starting in high school and then through their college and adult lives.  Easily put, Marianne and Connell love each other.  But author Sally Rooney shows us that love is often not easy.  There are endless obstacles, painful misunderstandings and secrets that make love seem just out of reach.  At its core, this is a coming of age story, but it deeply explores power dynamics in relationships and also privilege.

This was a deep read, but not so deep that I shied away from it, and I definitely recommend it.  The author also wrote Conversations with Friends, which I have added to my to-be-read list.