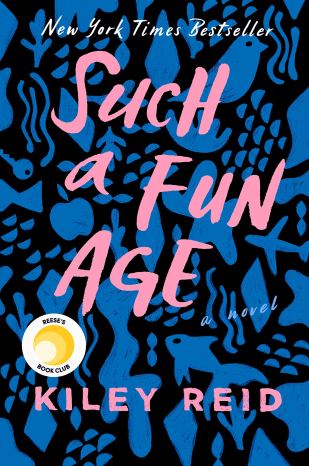 Cori’s Pick: Such a Fun Age by Kiley Reid

Have you read this book?  I desperately need to chat with people about this book.  Such a Fun Age is Kiley Reid’s debut novel and has received lots of hype, and rightly so.  It is relevant in painting a portrait of race and class in contemporary America.

The main character is Emira, a young black woman that has graduated from college and (barely) pays her bills by working as a babysitter for a white, upper-middle class family and their 2 young children.  In the first chapter, she ends up at a high-end grocery store with one of the children and the store’s security guard basically accuses her of kidnapping 2-year-old Briar who adores Emira.   This incident sets the stage for the series of events that unfold, including the intertwined lives of Emira’s boss and working-mom influencer, Alix Chamberlain, and Emira’s white boyfriend, Kelley.

I really enjoyed Reid’s writing from Emira’s point of view, and in my opinion, it laid the groundwork for Reid’s depiction of class and privilege throughout the book.  Including her reaction to the evening at the grocery store, compared to that of her white boss and boyfriend.  As well as Emira trying to figure out how to navigate adulthood, while she compares her life and job to those of her three best friends.  One of the things I really struggled with was Alix Chamberlin’s character.  I wanted to dislike her and treat her like the antagonist, but had moments where I was like, maybe she’s genuine?  Usually the antagonist role is obvious, but Alix didn’t seem outright evil – until the book progressed and then I found her to be so self-serving, which made me chalk her up as evil anyways.  This was a good read and I think it would make for excellent book club discussion.